The Mystery of the Missing Antimatter by Helen R. Quinn

In the first fractions of a second after the Big Bang lingers a question at the heart of our very existence: why does the universe contain matter but almost no antimatter? The laws of physics tell us that equal amounts of matter and antimatter were produced in the early universe--but then, something odd happened. Matter won out over antimatter; had it not, the universe today would be dark and barren. 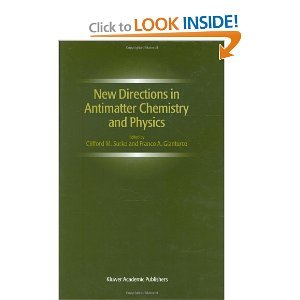 This book presents a state-of-the-art view of antimatter-matter chemistry and physics, with emphasis on the nanoscopic interactions of positronium atoms with ordinary matter. Selected applications are also discussed. The chapters present a summary of current knowledge in terms of both theory and experiment and as look to the future of research in this area. Extensive bibliographies are included to make the volume a useful reference book. This volume is intended for a broad audience, ranging from specialists in postron research to the graduate students who could use one or a few of  the chapters as the introduction to a research area. 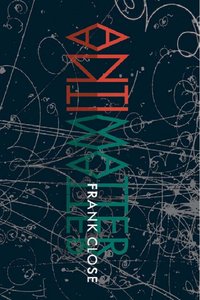 Of all the mind-bending discoveries of physics--quarks, black holes, strange attractors, curved space--the existence of antimatter is one of the most bizarre. It is also one of the most difficult, literally and figuratively, to grasp. Antimatter explores this strange mirror world, where particles have identical yet opposite properties to those that make up the familiar matter we encounter everyday, where left becomes right, positive becomes negative, and where--should matter and antimatter meet--the resulting flash of blinding energy would make even thermonuclear explosions look feeble by comparison.
Antimatter is an idea long beloved of science-fiction writers--but here, renowned science writer Frank Close shows that the reality of antimatter is even more intriguing than the fiction. We know that at one time antimatter and matter existed in perfect counterbalance, and that antimatter then perpetrated a vanishing act on a cosmic scale that remains one of the great mysteries of the universe. Today, antimatter does not exist normally, at least on Earth, but we know that it is real, as scientists are now able to make small pieces of it in particle accelerators, such as that at CERN in Geneva. Looking at the remarkable prediction of antimatter and how it grew from the meeting point of relativity and quantum theory in the early 20th century, at the discovery of the first antiparticles, at cosmic rays, annihilation, antimatter bombs, and antiworlds, Close separates the facts from the fiction about antimatter, and explains how its existence can give us profound clues about the origins and structure of the universe.For all those wishing to take a closer look at the flip side of the visible world, this lucidly written book shines a bright light into a truly strange realm.