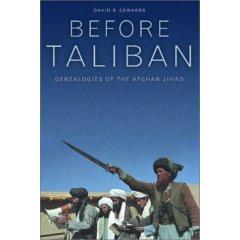 Before Taliban:  Genealogies of the Afghan Jihad
In this powerful book, David B. Edwards traces the lives of three recent Afghan leaders in Afghanistan's history--Nur Muhammad Taraki, Samiullah Safi, and Qazi Amin Waqad--to explain how the promise of progress and prosperity that animated Afghanistan in the 1960s crumbled and became the present tragedy of discord, destruction, and despair. Before Taliban builds on the foundation that Edwards laid in his previous book, Heroes of the Age, in which he examines the lives of three significant figures of the late nineteenth century--a tribal khan, a Muslim saint, and a prince who became king of the newly created state.

My Life With The Taliban (Columbia/Hurst) 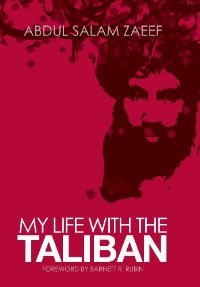 My Life with the Taliban is the autobiography of Abdul Salam Zaeef, a former senior member of Afghanistan's Taliban and a principal actor in its domestic and foreign affairs. Translated for the first time from the Pashto, Zaeef's words share more than a personal history of an unusual life. They supply a counternarrative to standard accounts of Afghanistan since 1979.  Zaeef shares his experiences as a poor youth in rural Kandahar. Both his parents died when he was young, and Russia's invasion in 1979 forced Zaeef to flee to Pakistan. In 1983, Zaeef joined the jihad against the Soviets, fighting alongside several major figures of the anti-Soviet resistance, including current Taliban leader Mullah Mohammad Omar. After the war, he returned to his quiet life in Helmand, but factional conflicts soon broke out, and Zaeef, disgusted by the ensuing lawlessness, joined with other former mujahidin to form the Taliban, which assumed power in 1994.