Death and the Afterlife

Free eBooks on Death and the Afterlife


Death and the Afterlife:  A Cultural Encyclopedia 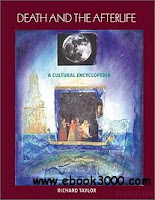 ABC-CLIO (2000) | English | ISBN 0874369398 | 438 pages | CHM | 1.72 MB.  This vast compendium of information contains hundreds of entries on the sometimes obscure, complicated, and mysterious (but always fascinating) funeral customs of dozens of cultures. Topics cover the burial and afterlife customs of China, the Greco-Roman world, India, the Near East, ancient Israel, the Iron Age Celts, Africa, Native Americans, Lapps, Islamic countries, modern Western society, and many other ancient and contemporary cultures. More than a gathering of information, this essential reference draws out the underlying meaning of funeral and afterlife traditions. It makes available a variety of human responses to that most fundamental reality of life: death.

The Afterlife Experiments: Breakthrough Scientific Evidence of Life After Death

Gary E. R. Schwartz, Publisher: Atria | 2002 | ISBN 074343658X | PDF | 400 pages | 18.3 MB  An esteemed scientist's personal journey from skepticism to wonder and awe provides astonishing answers to a timeless question: Is there life after death?  Are love and life eternal? This exciting account presents provocative evidence that could upset everything that science has ever taught. Daring to risk his worldwide academic reputation, Dr. Gary E. Schwartz, along with his research partner Dr. Linda Russek, asked some of the most prominent mediums in America -- including John Edward, Suzane Northrup, and George Anderson -- to become part of a series of extraordinary experiments to prove, or disprove, the existence of an afterlife.

Catholic Beliefs on Life After Death - Scripture from Scratch.
No one knows what life after death will be like, or heaven, or hell or purgatory. But we can gain an idea through Scripture, Catholic teaching and meditation.
The Roman Catholic View of the Afterlife by Paul Kirkpatrick.
Inherent in the understanding of the Roman Catholic view of the afterlife, one must first consider the Roman Catholic doctrine of sin and matters concerning redemption. Thomas Aquinas has long been a source of theological philosophy for the Catholic Church and has much to say on this and other subjects in his Summa Theologica, which was a series of collected essays on many biblical subjects.

Email ThisBlogThis!Share to TwitterShare to FacebookShare to Pinterest
Labels: Death and the Afterlife